Finland’s most magnificent Christmas calendar can be found in Lempäälä: Fibox donates EUR 30,000 to charity in several countries

Fibox, a global leader in enclosing solutions, is celebrating its 30th anniversary. To mark this anniversary, the Finnish family business built a Christmas calendar with 30 doors. Every day in December, Fibox will donate one thousand euros to charities for children, animals, or the environment in several countries.

The Christmas calendar is like a Fibox miniature. The company’s roots are in Finland, and its operations are global and local at the same time. Fibox has sales offices in 17 countries on almost every continent. The company is a major employer in Lempäälä, Finland. Its international offices operate in many parts of the world, such as in South Korea, China and the United States.

‘We used our enclosures to build a concrete landmark on the Lempäälä factory yard. With the calendar, we tell our story and create a shared experience, and also bring our own personnel all over the world closer together’, said Tapani Niemi, Fibox’s CEO.

The first calendar doors have now been opened, and Fibox’s early December charity destinations have been announced. These include the Swedish Min Stora Dag Foundation, which provides happy experiences and hope for children living in vulnerable situations; the Finnish Sylva ry, which provides support for children, adolescents, and young adults with cancer as well as their families; and the John Nurminen Foundation, which works to protect the Baltic Sea.

‘In December, we will support local organisations working for the benefit of children, animals, and environmental protection, not only in Finland and Sweden but also in Germany, Poland, India, the United States, France, Great Britain, China, and South Korea. Fibox has activities in all these countries.

‘We protect our customers’ valuable innovations.’

Fibox’s Christmas calendar was built using the company’s Arca enclosures, made of highly durable and recyclable polycarbonate. The enclosures come in many shapes and sizes, and they are used, for example, for healthcare equipment and in various industries, solar and wind power plants, 5G masts, and car-charging and -heating stations.

‘The enclosures protect our customers’ valuable innovations and electrical systems. We have great long-term customer relationships and also high-profile projects in different countries. The most famous is perhaps the Eiffel Tower, whose lighting solutions include 22,000 enclosures from us’, Niemi explained.

Sustainability is an important part of Fibox’s business. All existing thermoplastics can be recycled in the company’s own production systems, and no waste is generated. The Christmas calendar donations also reflect Fibox’s sustainable values and future visions.

‘Our values originate from the family business, and we make a point of placing our operations close to our customers: European products are manufactured in Europe, Asian products in South Korea and China and American products in the United States. Short supply chains reduce delivery times and the carbon footprint’.

‘Our proximity strategy and our desire to be close to our customers and people at large have been the secrets behind our success for 30 years now. They will also be Fibox’s guiding principles for the next 30 years and beyond’, Niemi envisioned.

Below you can find all the organizations we have donated so far:
1. John Nurmisen Säätiö,  protects Baltic Sea and marine culture
2. Sylva Ry, supporting children and relatives with cancer
3. Min Stora Dag, children and adolescents with critical illnesses and diagnoses 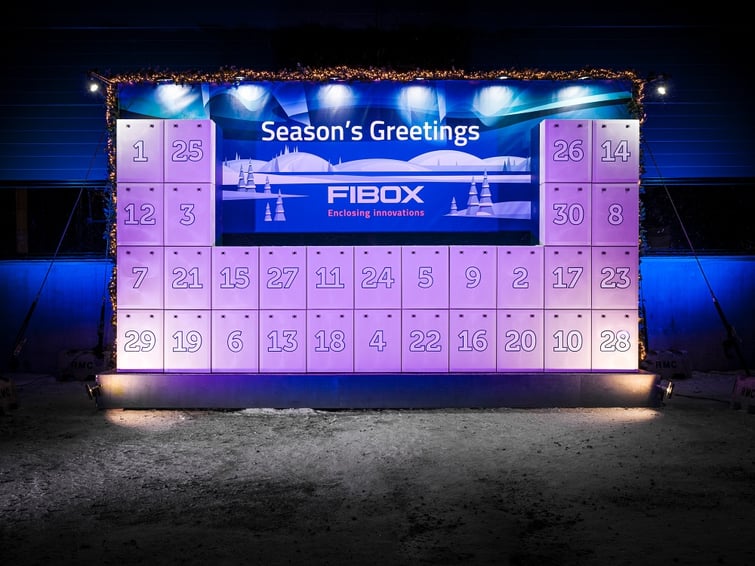 Close to the customer - celebrating 30 years of fibox

Fibox’s philosophy of being close to the customer has been the secret behind its three decades of...