Close to the customer - celebrating 30 years of fibox

Fibox’s philosophy of being close to the customer has been the secret behind its three decades of success. The Niemi family believes it’s the foundation for the next three decades, as well.

On the occasion of Fibox’s 30th birthday, we sat down with Tapani, Jyrki, and Anssi Niemi, to talk about the company’s past and future.

Looking back at Fibox’s early days, Tapani, how was it that you came to buy the company?

Tapani: In 1989, Fiskars made the decision to focus on consumer products and sell off their industrial operations. They engaged an investment banker, and I was the Fiskars employee sent around to make presentations to potential buyers. I would ask these companies, “What’s your strategy for the enclosures business?” but nobody had an answer that I thought was good enough! For these big companies, enclosures would have been just another product in their basket. So I found an investor that would go in with me, and we arranged a management buyout [MBO].

So what did you see or know that other potential buyers didn’t?

In those days we sold only to importers, and I knew we weren’t close enough to our customers. Our product range was also a bit narrow, and I thought we could attract more customers if we expanded it.

So once you completed the MBO and took control of the company, did that prove to be correct?

In those days we had only one factory and one-and-one-half guys working in sales. Everybody else worked in manufacturing or warehousing. All this was under one roof in Tammisaari, Finland. Instead of just selling to importers, we got closer to the customer by setting up our own sales force and selling to both wholesalers and end-users. That strategy was the seed for what we have today, which are sales companies employing about 70 salespeople covering 17 countries.

How did you first expand internationally?

The first sales company we built was in France, which at the time was very unusual for Finnish company. And we weren’t successful immediately, either – it took a lot of perseverance. Once we had our feet on the ground in France, we went to Sweden, Denmark, Finland, Germany, United Kingdom, South Korea, United States, and Poland. At the time of the MBO, our sales were around 10 million US dollars per year and we had about 150 stock keeping units [SKUs]. That’s where we started, and if there’s a secret to our growth I think it’s that I was good at finding the right people in each of these countries.

You took your sales network international, but how quickly did you take your manufacturing abroad?

In 1995, we moved the factory from Tammisaari. In the same year we set up a factory in South Korea. I had visited South Korea frequently in 1992 and 1993, and our customers and distributors informed us that competitors were planning to copy our products. To avoid that, and because the Finland-to-Korea supply chain was complicated, we made the decision to manufacture there. Korea made sense, because in those days China wasn’t developed and Japan was too difficult. Korea happened to be located right in the middle, a short flight to any of our Asian markets.

With 20/20 hindsight, is there anything you would have done differently with expansion?

Having the benefit of today’s experience I’d do the supply chain differently. For example, for our European network we moved our supply chain from Finland to Germany. We had over 1,000 SKUs and manufacturers close to us, and we picked that up and moved it to Germany. That’s easy to do on paper, but there are so many things to be planned and implemented and we didn’t have the organization to do it. What I’ve learned is how to make big changes with small resources. And that you must have enough resources and plan very carefully.

Despite those difficulties, things have turned out well. You operate in 17 countries, manufacture in seven, you’ve got loyal, long-term customers, and you’ve had some very high-profile projects.

Yes, we have some great customers like the Finnish wholesaler SLO, Onninen, and Elektroskandia in Finland. There’s also NHP in Australia. And thanks to customers, we’ve had some very high profile projects, as well. A customer in Germany that made illumination components asked us to make 22,000 housings for their systems which were installed for lighting the Eiffel Tower. There’s a beautiful 11-kilometer bridge in South Korea that also uses our enclosures. But behind all of this is the day-to-day, steady work we do with two basic product lines designed for many applications.

And Fibox has now become truly a family company. Thirty years ago your sons were infants, but over the past few years they’ve become active in the business?

In the early years family was of real value, because at home I had a wife and kids. It provided a different setting. When the kids got bigger they worked summer jobs at Fibox, and now, over the last few years, both Jyrki and Anssi have taken active roles in the company.

And both are interested in keeping the company in the family?

Tapani: I’ll let them answer that!

Anssi: Of course it’ll stay at family company. I’ve been full time at the company since 2015. I work mostly on the IT side of the business. Currently, we’re renovating our business intelligence system and I’m heading that project.

Jyrki: We’re both committed to it. I worked for a while at Eaton and ABB, and joined Fibox full time about three or four years ago. I currently head the cabinets and accessories business, as well as develop our EV charging business. It’s active in Finland but we plan to expand it geographically.

What kind of projects or innovations are you, as the new generation, bringing to the company?

Anssi: In our Lempäälä factory we are expanding and automating. We’re currently doing a pilot with self-driving forklifts that use lasers to perceive the environment and get around, as opposed to using the traditional spot markers. We all believe in investment in automation and digital tools for better efficiency and accuracy.

Jyrki: We’re after the best possible customer experience, and so we’re investing in tools that can make our operations more functional, from the customer interaction to the factory floor. For example, we’re investing in a new product information system, warehouse management systems, and manufacturing execution systems — things that can help us plan, control, and understand what we’re doing better.

One advantage Fibox has in today’s post-Corona supply chain puzzle is the capability to manufacture the same product in multiple countries. But you started doing that well before Corona hit. What led you to do that?

Tapani: We have a strong factory in China where we produced a lot for the US and Europe. We also had a factory near Tampere, where we’d receive components from China to process them. But we believed that this wasn’t a good arrangement for the long term. Our strength has always been that we’re close to our customers, and we felt European products should be produced in Europe, Asian products in Korea, and US products in the US. It was in 2015, well before Corona, that we started to do this.

Jyrki: We’ve been automating in our Lempäälä, Finland factory, and that’s because it’s easier to try things closer to home. We do a proof of concept here and when we’re happy with it we can do it in factories abroad, like in the US, where we’re planning a new phase to get more output with the same amount of effort. Our proximity strategy, from a customer perspective, means we can provide faster reaction time. Our customer base is very widespread and we can never predict what their projects will be, and a long supply chain doesn’t permit quick reaction.

Anssi: Also, if there’s an issue with a batch of products that we’ve shipped from Asia to Europe, it takes ages to get it fixed. But if our factory’s in Europe then it’s a couple of weeks, instead of a couple of months.

As you automate and become more efficient, is sustainability a hot topic?

Tapani: Sustainability is built into our business concept. The thermoplastics we use can be recycled within our own production system, so there’s no waste, and the products we manufacture last decades or longer. We have a South Korean telecom that made a new generation of repeaters, but used our same boxes – and that’s in an environment that’s humid, has lots of UV radiation, and is close to the sea with its corrosive salt. Our proximity strategy means we don’t ship goods far, so there’s less of a footprint there.

And in our Lempäälä factory we’re doubling our manufacturing space to 8,000 square meters, but we capture the waste heat from our injection molding machines and use it to heat and cool the facility. We were able to do this because we expanded an existing factory. Had we done a greenfield project elsewhere it wouldn’t have been possible.

People talk a lot about using green energy, but keep in mind it’s even more environmentally friendly to use less. Using less should be a bigger issue when we discuss sustainability.

A final question regarding the future. Fibox now has 700 employees, sales organizations in 17 countries, manufacturing in seven, 20 product lines, over 1,000 SKUs, and 100 million dollars in annual turnover. It’s probably difficult to do, but would you make some predictions for each of those numbers in 30 years' time? And will your growth be organic or through acquisitions?

Tapani: I think you answered the question yourself. It’s difficult or impossible to predict. It’s important to highlight that we’ve grown turnover from 10 million to 100 million almost without acquisitions. Of that 100 million in sales, perhaps six million is the result of acquisitions. All the rest is organic. We’re not opposed to an acquisition if it’s the right type of company, but entrepreneurship as at a very high level in our organization, especially in sales. Our plan is to execute what’s on our agenda and growth will come as a natural consequence of what we do well. 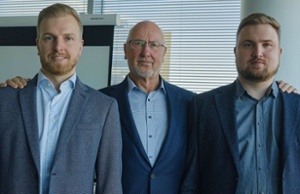 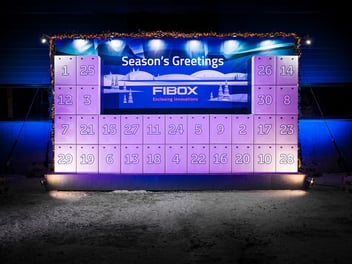 Finland’s most magnificent Christmas calendar can be found in Lempäälä: Fibox donates EUR 30,000 to...